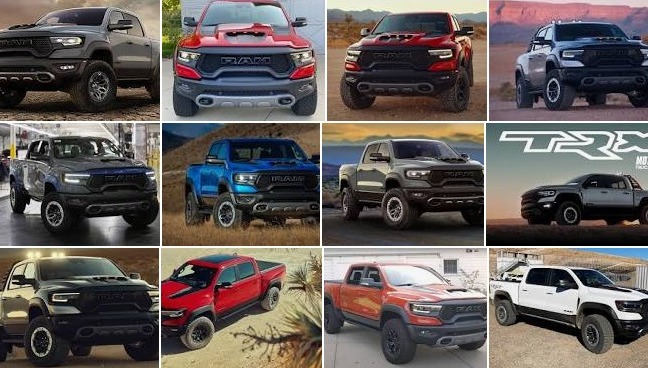 You know that scene in the “Jurassic Park” movies where the T-Rex rears up and roars in the visitor center or on the helipad to show everyone it’s king? This is that moment in truck history. 2021 Ram 1500 TRX 2021 Ram 1500 TRX The 2021 Ram 1500 TRX has reared up and roared, and we’ve hit peak truck. With a Hellcat engine, a long-travel suspension, and looks meant to menace, the TRX drips in excess everything. Nobody needs a TRX, but it’s not hard to understand why some people want one. I spent a week climbing hills and doing donuts in the snow, running errands, and taking my kids to school in the 2021 Ram 1500 TRX. Here’s what I learned about where Ram’s monstrous truck hits and where it misses.

With the Hellcat’s supercharged 6.2-liter V-8 under its hood, the TRX produces 702 hp and 650 lb-ft of torque, which goes to all four wheels at all times. Ram quotes a 0-60 mph run of 4.5 seconds. That feels about right by the seat of my pants, and it’s insanely quick for a vehicle that weighs 6,350 pounds. It’s also half a second quicker than the 2020 Ford F-150 Raptor, but the experience is vastly different, and it comes down to weight and drama. The Ram TRX weighs 653 pounds more, is much louder, and has launch control. Floor it and the feeling of acceleration drops your gut and makes your insides feel funny as all that weight shifts and lunges forward. Performing this feat a few times in a row might make some people sick.

Hellcats aren’t known for fuel economy, but the TRX is laughably insatiable. A colleague achieved 11 mpg in mostly highway driving in the TRX. That’s bad. During a frigid week in Minnesota with temperatures dipping to 20 below, I averaged 8.0 mpg over the course of 351 miles of mixed driving. That’s horrendous. The TRX has EPA fuel economy ratings of 10 mpg city, 14 highway, and 12 combined. Those seem a little optimistic. Your mileage may vary, but don’t expect it to vary on the high side of the ratings.

Read The Full Article Below